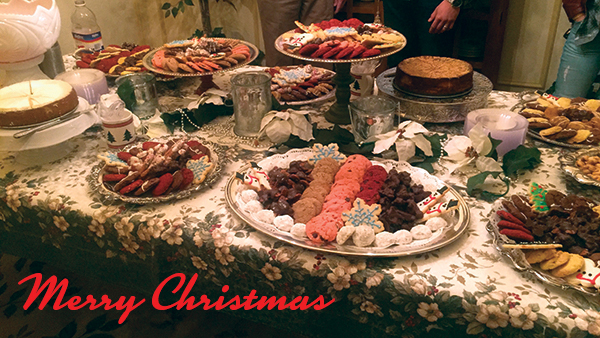 The house was beautifully decorated. Our host had adorned every surface with something of Christmas. The smells of spiced apple cider, fresh baked goodies and savory soup hung in the air. People arrived from all over Texas, many driving long distances to attend. Some people were weekly participants in the ministry, others we hadn’t seen in months. All came to celebrate a singular truth: Jesus transforms our lives!

Midway through the evening we all crammed into one room, around the tree, and begin singing the great carols of the season, a cappella. If you’ve never heard LHM sing, you are missing a real blessing. There’s something profound about the songs of the redeemed rising from the hearts of people who are keenly aware of what they have been saved from. Gratitude and grace flow from every singer like a mighty river, flooding the room with beautiful sounds of praise.

But that is when a LHM party becomes very different from most Christmas gatherings. At the end of each song, someone would  step forward and share what God had been doing in their life the past year. One by one, people would stand to proclaim the goodness of God and the wonderful grace and truth they had found through the teaching of the Gospel at Living Hope. The faces around the room were fixed on each speaker and the room filled with hope and anticipation of what would be shared.

One young man shared how a little over a year ago, he left his state and town as a drug dealer/user and a gay-identified young man to come to LHM for help. He had met with me once as a very young teen, but at that time, youth and the allure of immediate pleasures outweighed sound doctrine and Biblical truth. He spent the next several years entrapped in drugs and empty relationships. He shared how he now had been sober for over a year and had experienced freedom and hope he never thought was possible. He had met Jesus in ways he had only heard about from others, but now had experienced for himself. The Gospel had changed his life!

A young woman shared how she too had come to the ministry many years before, but had decided she simply wanted to be gay. She spent the last several years entangled in a relationship that stole her joy and her will to go on. At just the right moment, in the midst of those down times, she would often get a text or email from D’Ann, letting her know that she was in her prayers and that we were here for her if she was ready to come back. No condemnation. No shame. Just a “welcome home, we’ve been waiting for you. Just recently, this young woman called D’Ann, made personal efforts to attend the group, and sort through the intermittent years of hurt and pain. God was at work in her heart and she was excited to see what He was going to do.  She had hope!

After another song, a young couple moved to the front to share. He was involved in LHM for several years and found great freedom and healing from drugs and homosexuality. He eventually met his (now) wife, and she too attended LHM to better understand her then boyfriend, (now) husband. They shared how the truths of Gospel had transformed both their hearts. They shared how excited they were to recently discover she was pregnant then sadly miscarried their child months into the pregnancy. Sad, but not defeated, the lessons of perseverance they had learned and the faithfulness of God they had experienced, gave them the ability to trust God in the midst of this new challenge. Today, God is working through them to share with their church and community, the power of the Gospel to transform lives. They are becoming great evangelists!

Another young man, now in his thirties, shared that though he has not attended group as often as he once did, God was mightily at work in his life. He considered the group to be like family to him as they had been there for him through many difficult situations in his life. He was now strongly plugged into a local church, a small group, doing well, discipling other young men, and joyfully serving in his church. In fact, he was excited to announce that he was now dating a young lady and preparing to propose marriage in the days ahead. He is about to become a husband!

A parent stood to share that though their child was still actively gay-identified and had no desire for church or the things of God, he was continually encouraged by the lives of those he saw weekly at LHM group meetings who were making God-honoring choices in the face of increasing cultural pressures. He was excited to hear the life stories and see the transformation of so many who had found the work of Christ superior to anything offered by the world. He knew that God was good and He was at work even when he could not see God working. He had great hope for the future!

Those are just a few of the stories. I could go on and on. After each song, there were more amazing stories of God’s power, grace and redemption. Our Savior made His presence known among His people and we gave witness to the power of the Gospel to transform hearts and lives.

As I listened to their stories I was reminded of a vision the Lord continues to give me: It is a vision of strugglers standing in churches and in the public square, proclaiming the change that has taken place in their lives through the Gospel to a world that says that our sexual identity is fixed and immovable. It is men, women, children and families rising up and declaring that they would not even exist if it were not for the work of Christ in their lives transforming their mom’s, their dad’s, their husband’s, or their wife’s heart. It is the world believing that change is impossible, hearing these testimonies and seeing these people, and falling before the Lord in repentance and surrender to the power of the Gospel. It is Rev. 12:11 coming to life before unbelieving eyes: “And they overcame him because of the blood of the Lamb and because of the word of their testimony, and they did not love their life even when faced with death.”  I believe it is the next great revival in America ushered in by modern-day miracles of transformation and redemption. It well may be the next great awakening! The LHM Christmas party is indeed a party like no other because it is about a God like no other: Jesus, the Lord of Lord, the King of Kings, the Prince of Peace – God with us!